Many people enjoy fishing. It is a hobby that is both relaxing and competitive. It is also an activity that many people enjoy while on vacation and they find themselves passing on their enjoyment of fishing to younger generations.

Fishing does not necessarily require a lot of equipment. In its simplest form you need a rod and some bait. Over time however, companies have developed highly specialized rods, reels and lures. These are all great options, but what about getting back to the basics. What exactly do you really need when heading out for the day?

Some people would argue that the bait you use is the most important aspect of fishing. After all, the bait is what attracts the fish to your line, hopefully. So, it stands to reason that good bait is key. To be sure, you can find all types of bait at your local tackle shop. You could also go with an old stand-by and simply dig some worms up. But you would be missing a very versatile and often overlooked bait- crickets. 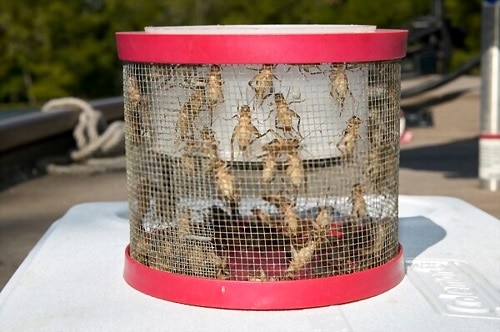 Would a fish eat crickets?

Crickets can definitely become a part of many fish diets during the late summer and fall months. This is due to the fact that bank disturbances as well as rain runoff wash crickets into streams and ponds. In addition, both crickets and grasshoppers are known to look before they leap when it comes to fleeing a person or animal. Unfortunately for them, they often land right in a pond or stream.

Although crickets are not as common a food source for fish during the summer as grasshoppers are, they are still enjoyed and gobbled up by the average bluegill or trout. For many small and even medium-sized game fish, crickets are considered a natural food item.

What types of fish eat crickets?

You can safely assume that most freshwater game fish and bait fish will readily consume crickets. Take note that an adult northern pike is not going to eat a cricket, but a fingerling pike will. Even the mightiest of freshwater fish like muskies, pike, flathead catfish, and striped bass, start their lives consuming small insects, tiny fish, and plankton.

With this is mind, you can reasonably expect to catch trout, bluegills, crappie, yellow perch, along with young bass and small walleye by using crickets. You may even catch bullheads and small channel catfish with crickets. Brook trout and bluegills seem to really search out crickets too. In fact, crickets can be almost as good as worms and grasshoppers for catching bluegills.

What is the best season to use crickets as bait?

Crickets are versatile can be used as bait year-round. However, most fishermen find the most success using them in the late spring and summer time of year when the bugs are out and panfish are feeding heavily on the surface of the water. May through mid-August seems to be the popular time of year when crickets are most prevalent and they end up becoming fish food. By the end of August, though, conditions are usually changing and crickets are prepping for Fall.

It is interesting to note that while crickets seem to catch the most fish during the summer, many ice fishermen have had great success using crickets on a jig head for catching yellow perch, bluegills, crappie, and brook trout through the ice. If your bait shop carries crickets during the winter, you are in luck. But don’t be surprised if you will need to go to your local pet shop to buy feeder crickets.

How do you bait a cricket on a hook?

There are a few different ways to bait a cricket on the hook, but most of them require you to pierce the cricket. This unfortunately puts a hole in the exoskeleton, which results in loss of motion and ultimately death. The simplest and most common way to hook a cricket is to thread the hook through the thorax behind the head. This will also give you the best hold of the cricket on the hook.

Can you bait a cricket without piercing it?

If you can, it might be nice to have the cricket alive and moving in order to attract the fish. The only way you can bait a cricket without piercing it is with special bait thread. With this thread, you would simply wrap a cricket in place around the hook. This method can be tricky; you do not want to use too much thread or the fish won’t buy it and you also do not want to crush the cricket. It is a good idea to make a couple loops of the bait thread around the cricket and hook. The bait thread is a nice option since it has a more natural color that will be harder for sharp-eyed fish to detect.

Other benefits to using crickets as bait

Another great reason for using crickets as bait is their sound. There is a theory that says that the sound crickets make create vibrations in the water that lure fish. Remember that crickets do not need to be sank too deeply to attract fish. In fact, a fishing bobber is used to keep that from happening.

Remember that fish respond rather uniquely, and abundantly, to crickets. While female crickets hone in on males with ‘trills’ most stimulating to them, fish are thought to be attracted to crickets because of their scent.

Fishing is an enjoyable sport and hobby. Today it is possible to buy the best rod, reel and bait at any tackle shop or sporting goods store. However, if you want to get back to the basics and have a readily available bait supply, take a second look at crickets.

Crickets make up a reasonable part of the fish diet. They are available in the yard or at a bait shop. In addition, there are theories that fish are attracted to the vibrations and or the scent of crickets. You have nothing to lose and quite possibly a successful catch to gain by trying crickets as bait next time you set out to go fishing.

Can You Put A Trolling Motor On A Kayak
How To Fish In A River With A Strong Current
Brook Trout Spawning : Everything You Need To Know
Do Crickets Make Good Fishing Bait?
How To Get Rid Of A Tree Stump
Deep Sea Fishing Tips For Beginners
How to Fell a Tree Against the Lean?
What Indicates that Foul Weather is Approaching?
How To Heat A Tent Without Electricity
Top 5 Best Longboard For Girls In 2020

Any cookies that may not be particularly necessary for the website to function and is used specifically to collect user personal data via analytics, ads, other embedded contents are termed as non-necessary cookies. It is mandatory to procure user consent prior to running these cookies on your website.