Brook Trout Spawning : Everything You Need To Know

If you are an avid angler, or just interested in freshwater fishing, you probably have heard about brook trout. These fish are interesting and have some pretty neat information if you dig a little bit deeper. Here is a closer look into brook trout and their spawning habits.

Before we go any further, it is important to realize that brook trout are not actually trout. They are in fact, members of the char genus, which is part of the salmon family. These fish are native to the eastern portion of North America, as well as Canada. These fish are found in freshwater rivers and streams and are known to be fighters, as well as for their distinctive colors.

The spawning behavior of the brook trout is perhaps the most important aspect of its life. It is crucial for their survival as a species. During peak spawning, the brook trout will exhibit certain behaviors that are distinct for males and females and they have certain environmental conditions that need to be met as well. 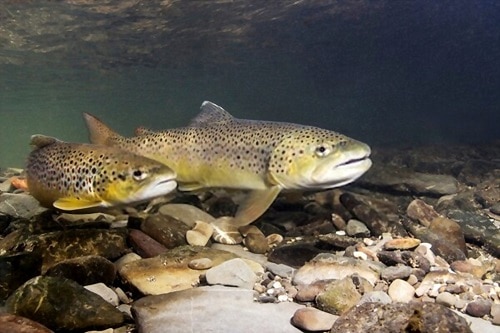 What are the environmental requirements for brook trout to spawn?

Brook trout spawning behavior is directly influenced by fluctuations in water temperature. When the warm summer water starts to give way to cooling fall water, the brook trout begin their annual spawning.

Any sudden rise in water temperature that lasts more than a few weeks will cause brook trout to delay spawning. The issue here is that it will cause the fry to be born much later in the springtime.

These fry will then struggle to gain enough in size and weight in order to survive their first winter. In addition, later hatched trout are far less likely to be mature enough to spawn their first year.

At what age is a brook trout ready to spawn?

What is the life cycle of an egg?

Brook trout enter their spawning season in early September and it can run through October depending on water temperatures.

The egg incubation period is from 95-100 days. This is also influenced by water temperature.

After about 100 days, the eggs will begin to hatch and the fry will start to emerge. This usually happens sometime between February and March. The earlier the fry hatch, the easier it will be for them during their first winter. No male fry born in April will be ready to spawn during their first year. As the spawn begins, males will try to force the females into shallow water that have gravel bottoms. If the female is willing, she will then select a good site and start building a redd.

A redd is a salmon form of a nest. These nests resemble little mounds of gravel.

As the female is building the redd, the male trout will begin its courtship activity. This involves the male brook trout darting and quivering next to the working female. He may also swim up against her and touch her with his fins.

Male brook trout undergo changes in physical appearance during spawning. The lower portion of the body will turn deep orange or even a bright red. Even more noticeable in males is the development of the trademark kype jaw. All male brook trout’s lower jaws will develop this hook shape. Some will be mild while, while older males have very defined hooks.

Brook trout make for some interesting fishing. This member of the salmon family is native to the eastern United States and Canada. Under the right conditions, these fish are known to spawn plentifully. Be sure to check local regulations in regards to you being able to “take” them during spawning season.

Can You Put A Trolling Motor On A Kayak
How To Fish In A River With A Strong Current
Brook Trout Spawning : Everything You Need To Know
Do Crickets Make Good Fishing Bait?
How To Get Rid Of A Tree Stump
Deep Sea Fishing Tips For Beginners
How to Fell a Tree Against the Lean?
What Indicates that Foul Weather is Approaching?
How To Heat A Tent Without Electricity
Top 5 Best Longboard For Girls In 2020

Any cookies that may not be particularly necessary for the website to function and is used specifically to collect user personal data via analytics, ads, other embedded contents are termed as non-necessary cookies. It is mandatory to procure user consent prior to running these cookies on your website.